A Guide to Ordering the Perfect Fish

Dirk Fucik has been in the fish business for 40 years, but his pet peeve remains the same: people who say they don’t like any kind of fish. His rebuttal? “You just haven’t had good fish. Or you cooked the crap out of it, the wrong way.”

Dirk runs Dirk’s Fish and Gourmet Shop in Chicago, an outpost of all things sporting scales, shells, and that fresh-from-the-ocean smell. It’s the kind of place where you walk in for an interview and walk out with a full stomach. While we were there, Dirk had us sample no less than five seafood dishes, including perfectly seared Japanese scallops and a tangy shrimp ceviche.

He also educated us on the different types of fish anyone can reasonably expect to find on a restaurant menu. Based on his knowledge, we’ve organized a five-step guide to ordering fish that should make the experience much less of a crapshoot.

Mild: “[When people say] they want fish that doesn’t taste like fish … they’re looking for something mild,” said Dirk. Mild fish are white-fleshed, and tend to be very versatile. You can dress them up with marinades and toppings—and in fact, you might have to, because the mildest of them will be quite bland otherwise. When it comes to tilapia, for example, Dirk said, “I tell people to use that for tacos.” 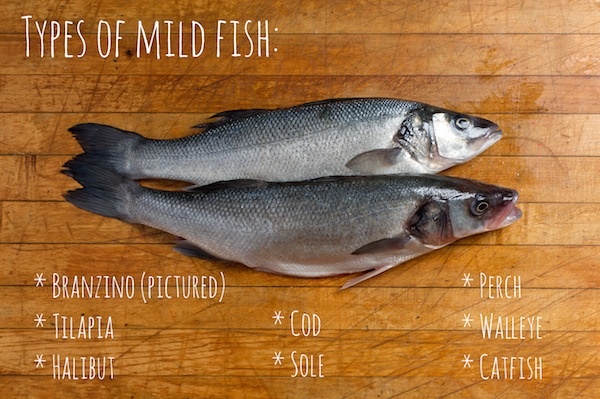 Medium: Medium-flavored fish “have a nice flavor to them [that] won’t scare people away,” said Dirk. They’re the jacks-of-all-trades in the fish world, in that you can add a little or a lot to them and end up with a lovely meal either way. If you’re eating one for the first time, however, Dirk recommends using only the most basic marinade: olive oil, salt, pepper, and lemon zest. That way, you can recognize the fish’s base flavor and decide whether or not you like it. 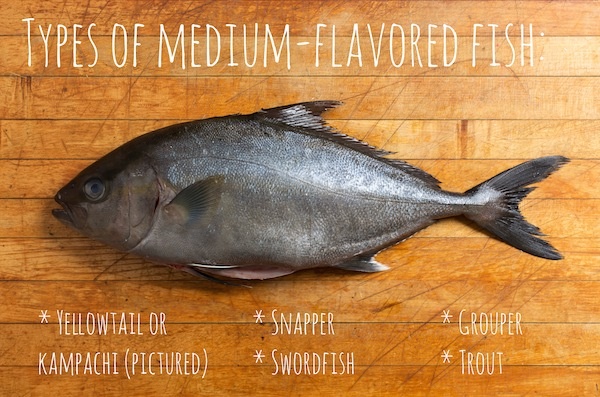 Full: Sometimes called oily fish, full-flavored fish have dark flesh and a very distinctive taste. They might evoke the briny deep with saltiness, or, as is the case with salmon, have a strong flavor profile all their own. They’re also typically the most expensive, and with good reason. When prepared the right way, they can be just as decadent as any slab of steak. Dirk showed us an Ora King salmon from New Zealand that he calls “the wagyu of salmon, because it’s got such a nice fat content … when you cook this, you don’t even have to chew it.” 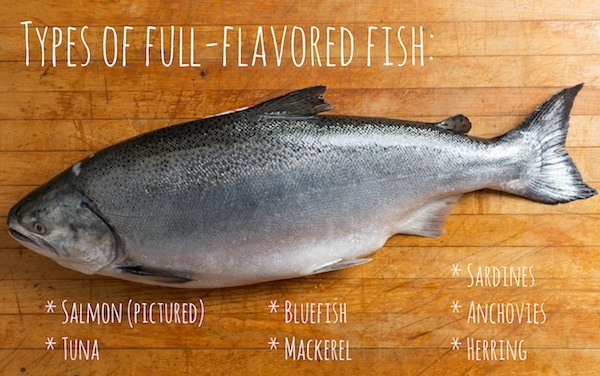 One good indicator of a fish’s flavor is the color of its uncooked fillet. The whiter the flesh, the milder the taste. Here’s a picture of a flavor spectrum ranging from full to mild: 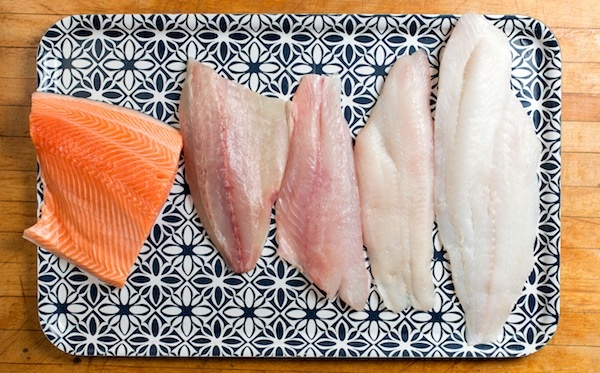 Fish are intensely seasonal creatures, so fish-market owners like Dirk have to keep calendars of what’s available at any given time. Fish farms have made it easier to eat some species year-round, but if you want wild-caught arctic char from Nunavut, you’ll have to wait for the single month out of the year when they’re sold. As Dirk explained, “there’s always something to be had somewhere, but you can’t always get your [first] choice.”

The semantics of fish are more thorny than you might think. If you’re hankering for Chilean sea bass, you’re actually craving Patagonian toothfish—it was rebranded with a more appetizing name for American markets in 1977. Likewise, Asian carp is an invasive species with a bad rep, so people have taken to calling it Kentucky tuna or silverfin.

Not even fish ‘n’ chips is immune to this kind of advertising. In England, it might be more accurately referred to as shark ‘n’ chips, as some pubs still make it from spiny dogfish—a type of small shark—despite regulations passed for its conservation. Menus will often bill these and other shark species as rock salmon or flake.

Oh, and Atlantic salmon is farmed, whereas Alaskan or Pacific salmon is wild-caught. (Want to know where it’s from exactly? Your best bet is to start a friendly rapport with your local fishmonger.)

Dirk’s key piece of advice for people who want to order and eat fish responsibly is to ask questions—of your server, your grocery store, and your phone. He recommends downloading the Monterey Bay Aquarium’s Seafood Watch app. The app allows users to search for fish by their common market name, learn whether or not a fish is endangered, and find restaurants committed to serving sustainable seafood.

Dirk’s final suggestion to anyone who’s stumped by a long menu is to keep an open mind. Don’t turn your nose up at fish just because you’ve been burned in the past; rest assured that there is a fish for every palate.

You might also find that the more research you do, the more you’ll appreciate a fish’s flavor. As Dirk said, “Part of the fun of eating fish is that they all have a story.”

How to Eat a Whole Fish

Mel writes about food and beauty trends. She would rather give up chocolate than onions.