In 2014, Universal Orlando Resort cast an Enlargement Charm on the Wizarding World of Harry Potter, allowing visitors to experience Diagon Alley as well as the village of Hogsmeade, connecting the two via the Hogwarts Express. Both are fantastically detailed evocations of JK Rowling’s books and their hugely successful film adaptations, rewarding casual fans and hardcore Gryffindor hopefuls alike with a slew of magical surprises. We’ve gathered 10 insider Harry Potter World tips to help Muggles make the most of their visit.

1. Interact with the London streetscape.

There’s magic in the air before you even leave the Muggle world. Step into the red phone booth outside King’s Cross Station and dial 62442 (MAGIC), and you’ll be connected to the Ministry of Magic. Keep your eyes on the windows at 12 Grimmauld Place; Kreacher the house elf peers out every couple minutes. And if you peek inside the triple-decker Knight Bus, you’ll see beds, a chandelier, and a chatty shrunken head hanging over the steering wheel. 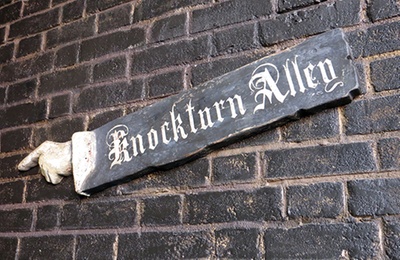 With an interactive wand from Ollivander’s shop in Diagon Alley, you can cast spells to make feathers float, umbrellas rain, and statues move at locations throughout the park. Take the map that comes with your wand into spooky Knockturn Alley and hold it under a blacklight—hidden locations will glow in the dark, showing you where to put your wand to the test.

3. Exchange your dollars for wizarding money.

Pop into the Gringotts Money Exchange (near the bank’s main branch, which has a roller coaster inside) to swap your Muggle money for Gringotts bank notes that are accepted throughout the park. Chat with the goblin on duty while you wait. 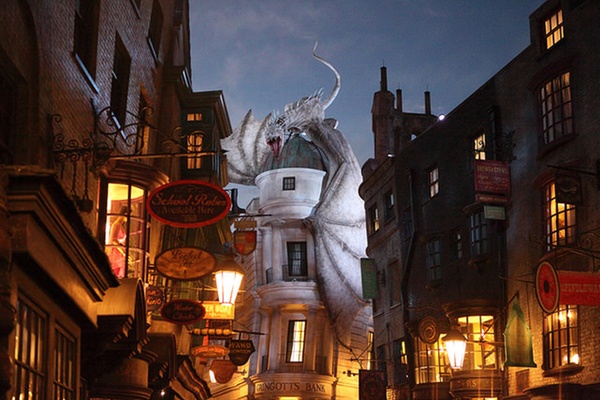 Every 20 minutes, the enormous dragon perched on top of Gringotts Bank belches an impressive ball of fire. For the best view, stand alongside the Weasleys’ joke shop or the raining umbrella near the bathrooms.

5. Pay close attention while you shop.

Don wizarding robes at Madam Malkin’s Robes For All Occasions, and a talking mirror will tell you how you look. At Weasleys’ Wizarding Wheezes, fireworks perpetually explode over the skylight. And the snake in the window of the Magical Menagerie speaks to passersby first in Parseltongue, then in English.

6. Ride the Hogwarts Express in both directions. 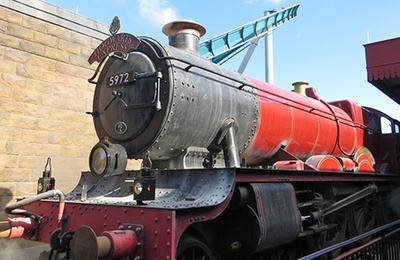 With a park hopper pass, you can take the train into Hogsmeade from Platform Nine and Three-Quarters—look ahead to watch your fellow passengers disappearing into the brick wall between Platforms Nine and Ten. During the ride to Hogsmeade, you’ll see rolling countryside out the windows and, through the frosted doorways leading into the corridor, a herd of escaped chocolate frogs and shadowy Dementors. The ride is different on the way back, so go in both directions if you want the full experience.

Until your next Orlando vacation, live Harry’s journey through the films. 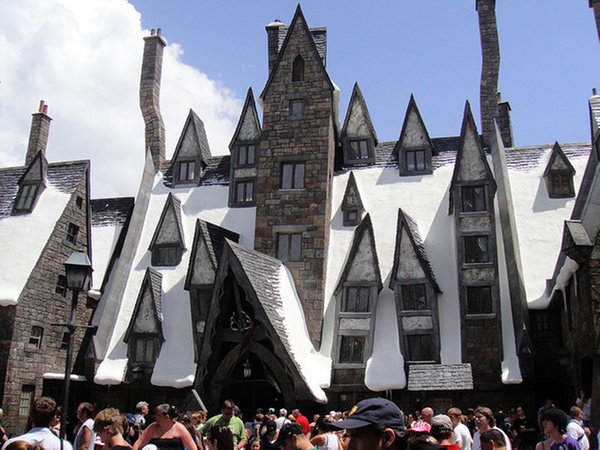 While waiting in line for the Harry Potter and the Forbidden Journey thrill ride, you’ll travel through Hogwarts, starting with the herbology greenhouses and continuing through classrooms with talking portraits, moving staircases, and falling snow. For a closer look, take an unguided castle tour (ask a costumed student to point the way) running parallel to the ride line. That way, you can linger in the halls to overhear a Potions lecture and peer into the Pensieve in Dumbledore’s office.

8. Check out the haunted bathrooms.

Even the restrooms are enchanted here. Stop in to use the facilities next to the Hog’s Head Pub, and you’ll hear the ghost of Moaning Myrtle splashing around in the plumbing and bewailing her unlucky fate.

At the Owl Post, the wizard or witch behind the counter will stamp your postcards with a special Hogsmeade postmark before handing it off to the nearest owl for delivery.

10. Indulge in magical eats and drinks.

It’s a good idea to show up with an empty stomach. For lunch, sit down to a meal of traditional pub fare at The Leaky Cauldron. Afterwards, head to Honeydukes candy shop to stuff your robes with Bertie Bott’s Every Flavour Beans, Chocolate Frogs, and Fizzing Whizzbees. There are many spots throughout the park where you can sip butterbeer and pumpkin juice like the characters in the books or, if you’re over 21, you can enjoy a Wizard’s Brew stout or Dragon Scale lager.

Photos: Stephanie McDaniel, Groupon; Diagon Alley at Night by Sam Howzit, Wizarding World of Harry Potter - Hogsmeade by The Conmunity - Pop Culture Geek, and Honeydukes by Anna Fox, all under CC BY 2.0