It’s a bit odd that cue sports are often played in bars, because casual players need all of their senses about them just to tell what’s going on. And yet, despite the litany of rules and tricky angles, there’s no feeling quite as triumphant as when you sink that final shot.

In the interest of sharing that feeling with everyone, we’ve created a rundown of five types of cue sports you might encounter at more discriminating pool halls, ranging from common to harder-to-find.

Explanation: After the break, each player is assigned to either the striped or solid-colored balls. The goal is to pocket all of the balls in your color, then to sink the eight ball in a called pocket.

Despite its status as an American classic, eight-ball is a relatively young cue sport that started gaining traction in the early 20th century. Now, of course, you can find it in practically every corner tavern in America—and plenty of others in Europe, Latin America, and the Middle East.

But this popularity comes with a price: nobody can really agree on the rules. In most common forms of the game, if you accidentally sink the cue ball—or “scratch”—after you sink the eight ball, you lose. Scratching on the break is also considered an automatic loss in most cases. If you want to avoid a barroom brawl, make sure you understand the local rules ahead of time.

Explanation: Players use the cue ball to pocket any ball on the table, regardless of color. Each ball is worth one point, and a game may be played to up to 100 or 150 points. Balls may be re-racked several times throughout a game, and players must call the ball and pocket on each shot.

If you’re of a certain age, you probably have a soft spot in your heart for straight pool. This style dominated pool halls at least through 1961, when Jackie Gleason and Paul Newman went head to head in The Hustler (rumor has it that Gleason, a notorious pool fiend, did all his own stunts).

Unlike the relatively quick contemporary eight-ball games, a game of straight pool is a marathon. Players must sink up to 150 balls to win a game, so re-racking is necessary once only the cue ball and one object ball remain on the table. At that point, the rest of the balls are racked while the one left standing remains in position. Read up on the rules here.

Number of Balls: 3 (1 white cue ball for each opponent and 1 red object ball)

Explanation: Carom is played on a pocketless table. Players score points by rebounding their cue ball off both the object ball and their opponent’s cue ball in the same shot.

Carom might look totally foreign to the modern pool player, but it’s actually one of the oldest cue sports around. Its name comes from the Spanish carambola (“rebound”) and refers to a strike either off a ball or the rail. Pockets are of no concern here because, well, there aren’t any. In another quirk of design, the table’s cloth-covered slate surface is slightly heated to eliminate moisture and speed up the action.

So, where in America might you be able to play a game of carom? Tables are few and far between, but the sport has been growing in popularity in recent years. Carom Cafe Billiards in Flushing, New York, is one of the few spaces dedicated to carom. It also houses the United States Billiard Association, whose website hosts a directory of other places to play. 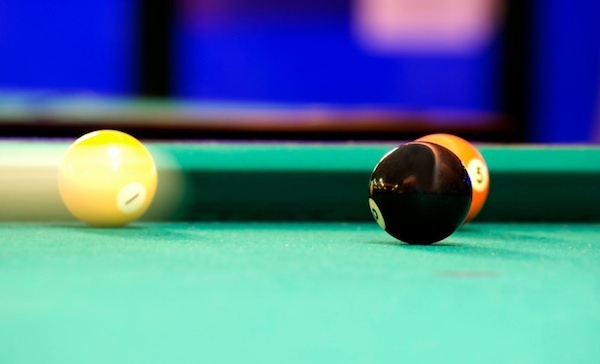 Also Known As: With a name as mighty as “Snooker,” who needs an alias?

Explanation: A snooker table is larger than a standard pool table but also has six pockets. Players score points by initially pocketing a red ball, then pocketing the other numbered balls in ascending order.

Snooker isn’t just a funny name. It refers to one of the game’s principal strategies: when you “snooker” an opponent, you create a situation in which they cannot hit their ball in an easy, straight line. This can be done by positioning your own ball in front of the one they need to hit, thereby forcing them to hit a difficult bank shot. All told, it’s a delightfully mean-spirited affair.

While not nearly as popular in America as eight-ball, snooker is a sport on the rise. It’s not exceptionally difficult to find a place to play, but you won’t have any luck playing on an American pool table—snooker tables are quite a bit larger, measuring in at roughly 12’x6’. Thankfully, the United States Snooker Association has made it easy by providing a directory of all the bars and pool halls where snooker is played in the US.

Also Known As: The English Game, The Common Game, The Queen’s Game

Like everything in England, English billiards is essentially a more sophisticated version of its American kin. For this very reason, you’ll have very a difficult time finding a dedicated place to play. Luckily, an English billiards table has exactly the same dimensions as a snooker table, so you can certainly rig a solution by using a few re-appropriated snooker balls. If you need some extra guidance, read up on the rules for both snooker and English billiards here.