Much mystery clouds the origins of the Reuben sandwich. In fact, there are two stories that compete for authenticity. The more straightforward one credits New York’s Reuben’s Delicatessen with the invention sometime around 1914, but even those who ascribe to this telling are split.

They say that the Reuben was either 1) a scrappy improvisation made when the kitchen was strapped for ingredients, and served to the famous Broadway actress Marjorie Rambeau, or 2) a creation dreamed up by the deli’s chef for owner Arnold Reuben’s son, Arnold Jr.

Another theory pins the reuben’s origin to about a decade later, give or take, when a group of men partook in a weekly poker game at the Blackstone Hotel in Omaha, Nebraska. It was tradition at this game for every person to chip in a nickel or so for snacks, and one day, a player asked for a dish that would incorporate two of his favorite foods: corned beef and sauerkraut. He was pleased when the hotel owner’s son presented him with a piping hot sandwich, piled high with these ingredients. That poker player’s name? Reuben Kulakofsky.

In a story for the New York Times, Elizabeth Weil, writer and great-granddaughter of one of those poker players, confirms this version—if only through her own family anecdotes.

However it was invented, the Reuben remains a sandwich-shop mainstay. In fact, no delicatessen would dare call itself a delicatessen without a Reuben sandwich on the bill of fare. 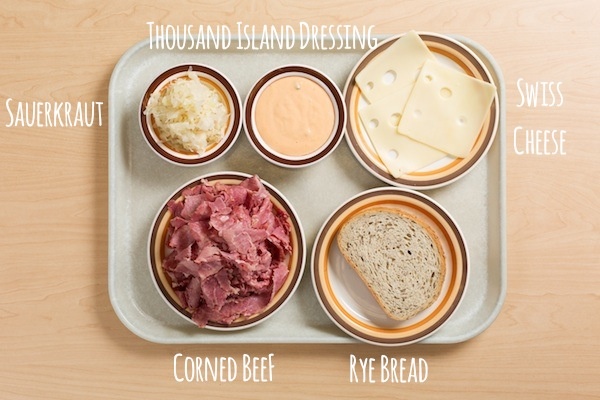 Slather the bread with thousand island dressing before stacking on the other ingredients. Throw the sandwich on the grill, and serve it hot.

Again, the go-to place for a classic Reuben sandwich is the neighborhood delicatessen—the older the better. Think New York’s Katz’s Delicatessen, a city staple since 1888, and Langer’s Delicatessen-Restaurant in LA, which opened in 1947.

Manny’s Cafeteria and Delicatessen has been thriving in Chicago since shortly after World War II. Inside, ordinary folk rub elbows with once-local luminaries, such as Barack Obama and David Axelrod, who has his own table. Who better to share inside info on the Reuben sandwich than third-generation Manny’s co-owner Dan Raskin, who’s been eating—and making—Reubens since childhood?

Why is the Reuben so good?
I think it’s the different textures and layers to the sandwich, with the cheese and the kraut and then the grilled bread.

Is a Reuben without rye bread still a Reuben?
A Reuben is a Reuben with the ingredients of rye bread, corned beef, sauerkraut, swiss cheese, and the Thousand Island dressing. I mean, it’s just not considered a Reuben sandwich if you change it; it’s basically just a grilled sandwich. People come in and ask for all different sorts of things on there, and some of them taste good and some of them don’t, but it’s still not a Reuben.

What pairs well with a Reuben?
I’ve always been a big fan of cream soda. I think it’s a typical deli drink. To me, there’s nothing like eating a big deli sandwich and a cream soda.

I like our potato pancakes. A lot of places do really thin ones, and ours are thick and they have a great texture to them. I think it really complements the sandwich.

What makes the Reuben at Manny’s special?
For our corned beef, we have particular spices and a flavor profile. Another reason it’s so good here is because we go through so much, so it’s fresh; it’s not just sitting around all day. When you slice it thin, and it’s already cooked down a lot, the longer it sits, the drier it gets. When you eat it right away, it’s still got a lot of flavor in it.

How do you eat yours?
Some people put the thousand island [dressing] on the sandwich like you’re putting mustard on the sandwich, but I like to dip it in there. I think that’s the best way to [get] all the different textures and layers.

Take a bite out of other classic sandwiches:

The Jibarito, a Sandwich That Ditches Bread for a Pair of Bananas