Any price comparison is to a new, nonrefurbished product price.

Guide to Buying a Tablet

Before you buy a tablet, we'll help you pinpoint the best size, specs, and accessories for your needs, whether it's for work, kids, or gaming.

Quiz: Which Tablet Should I Buy?

Can't decide between an iPad, Surface, or Android? Take our four-question quiz. We'll guide you to the tablet you should buy, based on your needs.

Sold by Groupon Goods. View the FAQ to learn more. 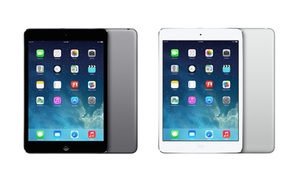 essufay Verified Purchaser
Sep 13th, 2019
I was supposed to receive 2 of them and I got One . So when I contacted Groupon they wanted to refund me $38.15 when I paid $190.18 Terrible terrible terrible. I wish they would send the other I pad or refund me at least half of what I paid It’s not fair at all.
Was this helpful?
Thank you for your vote (Undo)
Eleanore Verified Purchaser
Jun 17th, 2019
Excellent condition!
Was this helpful?
Thank you for your vote (Undo)
Jon Verified Purchaser
May 12th, 2019
I received the iPad in good condition although poorly package. In a box with nothing to secure int in place. Everything was flopping around. Before I opened the package you can hear and feel it basically rolling around. I opened the package and yep loosely placed in a box with "0" packing. I've never seen that before. I turned it on and I had enough power to get it setup or I thought I did. I have tendonides right know and too much using my hands is painful. I would touch something and it would not respond. I had to push very hard on the screen to make it respond. I sent them an email about this problem. They left a card in the box saying if I encountered a problem to contact them by email. It's been three days now with no response. They also include free screen saver film. I thought this might be a problem so I removed it. It does seam to work much better. I was going to send it back but now it's within my satisfaction limit. I really don't expect a brand new iPad mini for the price I paid so I will put up with a little inconvenience. Why leave your email address if they don't reply? Makes no business sence to me.
Was this helpful?
Thank you for your vote (Undo)
Joelle Verified Purchaser
Apr 1st, 2019
works perfect, great deal
Was this helpful?
Thank you for your vote (Undo)
1 person found this review helpful
Showing 4 of 4
3.8