Offering two looks in one, these versatile embossed sets are designed to complement most bedroom styles

Four Questions to Ask When Choosing a Comforter

When shopping for a new comforter, use this guide to make sure you've found the best fill type, loft, and thread count for your sleeping needs. 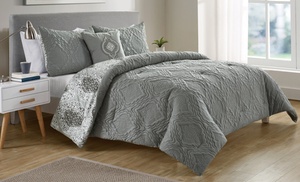