After purchasing this deal, you'll need to visit the website listed on your voucher to complete redemption. Learn more about redemption codes.

Promotional value expires 90 days after purchase. Amount paid never expires. Limit 1 per order. Valid online only. Procurement and Production charge of $11 is additional. Every purchase of a decorative title helps with the restoration of historic Dunans Castle, its bridge and grounds in Argyll, Scotland, and each Lord and Lady becomes part of an international community of interest and can visit the project whenever they like. Limit 5 per person, may buy 5 additional as gift(s). Valid only for option purchased. Not valid with other offers or promotions. Merchant is solely responsible to purchasers for the care and quality of the advertised goods and services.

The Dunans Castle's name first appeared on maps in 1590. Originally owned by Clan Lamont, this Scots Baronial castle was purchased by the Fletcher family in the early 18th century and was sustained by the family until 1997 when it was sold by the heirs of Colonel Archibald Fletcher—one of the proposed inspirations for Ian Fleming's James Bond. The castle served as a hotel until 2001 when a fire scorched all but the pre-Victorian west wing.

Today, the estate is run by Dunans Castle Limited as they work to restore the castle. The bridge, built in 1815 by Thomas Telford to commemorate the battle of Waterloo, still stands along with the fully-restored north wing, referred to as the Dunan's House. The area around the castle is lush with green hills and woods and a river for fishing. The grounds are reportedly home to three ghosts: a grey lady on the staircase; a spirit forever crossing the bridge who was, perhaps, one of the bridge's builders; and a figure on the grounds which some have claimed bears a resemblance to Colonel Archibald Fletcher. 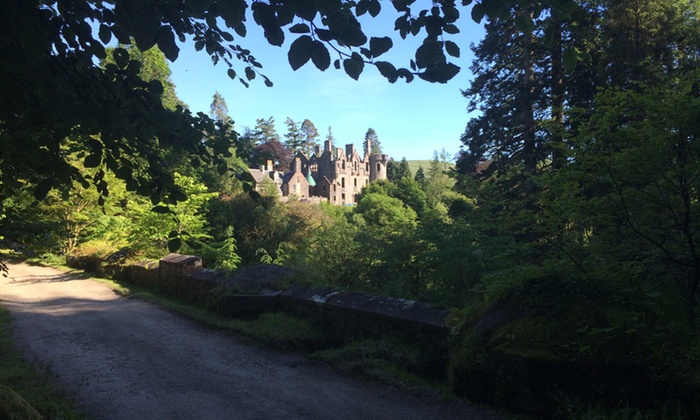